MART-1 recognizes a protein of 18 kDa, identified at MART-1 (Melanoma Antigen Recognized by T cells 1). MART-1 is a useful addition to melanoma panels as it is specific for melanocytic lesions (1- 3). Studies have shown that MART-1 is more sensitive than HMB45 when labeling metastatic melanomas (3). Tyrosinase is a key enzyme involved in the initial stages of melanin biosynthesis. Studies have shown Tyrosinase to be a more sensitive marker when compared to HMB45 and MART-1. It has also been shown to label a higher percentage of desmoplastic melanomas than HMB45 (1).The combination of MART-1 and Tyrosinase aids in identifying metastatic melanoma in sentinel lymph nodes (2).

The transcription factor SRY-related HMG-Box gene 10 (SOX10) plays an important role in neural crest, peripheral nervous system, and melanocytic cell development (4-8). SOX10 is widely expressed in normal human tissues including melanocytes and breast tissue. SOX10 is also an important marker in malignant tumors such as melanoma, breast carcinoma, gliomas, and benign tumors such as schwannomas (4-6). More importantly, SOX10 has been shown to be expressed in the vast majority of desmoplastic and spindle cell melanomas and has also been shown to be expressed in 100% of nevi (4, 5). SOX10 is also less likely than S100 to be expressed by background fibroblasts and histiocytes within scars, and thus SOX10 may be superior to S100 in these types of cases (6).

The combination of SOX10 with MART-1 and/or Tyrosinase has been shown to stain a higher percentage of melanomas in lymph nodes and in metastatic melanoma compared to S100. It has also been shown to be more specific than S100, considering that S100 stains dendritic processes in lymph node while SOX10, MART-1 and Tyrosinase are negative (7, 8). The cocktail of SOX10, MART-1 and Tyrosinase may be suitable for tumors of unknown origin or in differential diagnosis of melanoma and its mimics. PATENT PENDING. 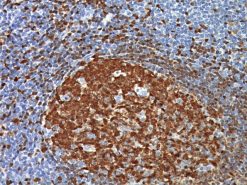