CD19 recognizes a 95kD cell surface glycoprotein, which is expressed by cells of the B-cell lineage and follicular dendritic cells. CD19 is a coreceptor of CD21 and is an important signal transduction molecule which is involved in the regulation of B lymphocyte development, activation and differentiation. Among the B-cell genes that are present in early B-cell development and are upregulated by Pax-5 are CD19 and CD79a. CD19 is found in pre-B cells, B cells (considered a pan Bcell antigen); first B-cell antigen after HLA-DR and follicular dendritic cells. CD19 is absent in plasma cells, most T-cell lymphomas and in lymphocyte predominant Hodgkin’s. It has been observed in lymphomas and leukemias but often weak/negative in follicular lymphoma or diffuse large B-cell lymphoma.

Regulatory Notice: Biocare’s IVD-labeled products comply with US-FDA and European IVDD regulation. Other regions may have additional requirements for such labeling, please contact your local distributor.

Be the first to review “CD19” Cancel reply 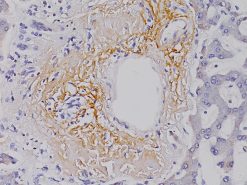