p40 antibody recognizes the shortest variant of human p53, and it may be a valuable marker in cases where p63 has traditionally been used. At present, p63 is the most frequently used marker for lung squamous cell carcinoma (SqCC). p63 is extremely sensitive for SqCC; however, it suffers from specificity limitations due to its reactivity in a subset of lung adenocarcinomas. Diagnosing non-small cell lung cancer (NSCLC) by morphology in small samples (e.g. biopsy, cellblock, FNA) can be difficult. Given that conserving tissue for molecular testing is a priority, a minimalist immunohistochemistry (IHC)-based diagnostic approach is warranted.

In a recent study, p40 staining was equivalent to p63 in sensitivity for SqCC, but was exhibited markedly superior specificity vs. p63, which eliminated a potential pitfall of misinterpreting a p63-positive adenocarcinoma as squamous cell carcinoma.1 This report strongly supports the routine use of p40 as an alternative for p63 when used in the diagnosis of pulmonary squamous cell carcinoma. p40 may prove to be an important antibody in the differential diagnosis of lung adenocarcinoma vs. lung SqCC. 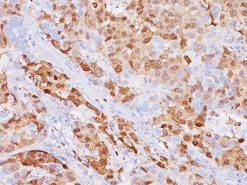 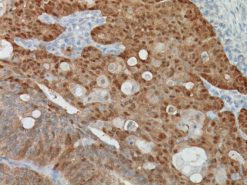