CK5/14 + p63 + CK7/18 is comprised of mouse monoclonal anti-CK5, anti-CK14, and anti-p63 antibodies and rabbit monoclonal anti-CK7 and anti-CK18 antibodies. CK5 and CK14 are high molecular weight keratins expressed in the cytoplasm of basal cells and myoepithelium of breast tissue (1-4). p63 is a transcription factor present in the nuclei of myoepithelial cells (2,4). In contrast, CK7 and CK18 are low molecular weight cytokeratins primarily expressed in luminal cells of the breast (1-3).

CK5, CK14, p63, CK7 and CK18 have routinely been used as IHC markers to complement morphological evaluation in the assessment of breast lesions, due to the differential expression of the luminal vs. basal and myoepithelial markers (1-5). Cases of usual ductal hyperplasia (UDH) have been associated with expression of the basal cell markers, intermixed with cells expressing the keratins of luminal cells (1-2,6-10). Most cases of atypical ductal hyperplasia (ADH) and low grade ductal carcinoma in situ (LG-DCIS) were negative for the basal markers and exhibited an immunophenotype indicative of luminal cells (1,5-8). Additionally, the basal phenotype has been shown to be characterized by luminal expression of the basal and myoepithelial markers, using a cocktail of CK5, CK14 and p63 (11-13). 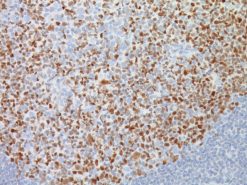 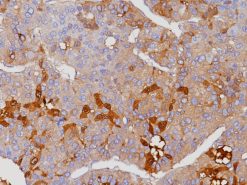