CDX2 is a homeobox gene that encodes an intestine-specific transcription factor (1). CDX2 has been useful to establish gastrointestinal origin of metastatic adenocarcinomas and carcinoids and can be especially useful in distinguishing metastatic colorectal adenocarcinoma from tumors of unknown origin (1-7). CDX2 has been shown to be more specific and more sensitive than villin or CK20 (1,4,6). CDX2 has also been shown to be expressed in mucinous ovarian cancer, bladder adenocarcinoma, cholangiocarcinoma and malignant germ cell tumors of the testes (1,2,6-8). Only very rare examples of carcinomas of the genitourinary and gynecologic tracts or breast, lung, and head and neck cancers showed elevated levels of CDX2 expression (1).

CDH17 (Cadherin 17 or LI-cadherin) is a novel oncogene expressed in intestinal epithelium which is involved in tumor invasion and metastasis (9-10). CDH17 is a highly specific marker in colon cancer (99/99, 100%) and is a more sensitive marker than CDX2 (93/99, 94%) and CK20 (91/99, 92%) (11). Overexpression of CDH17 (and conversely, under expression of CDX2) correlates to poor prognosis in patients with epithelial ovarian cancer (1). CDH17 may be helpful for early diagnosis of Barrett’s
esophagus (12). CDH17 has been shown to be a useful marker for distinguishing between primary urinary bladder adenocarcinoma and urothelial carcinoma with glandular differentiation (13). Note that CDH17 does not distinguish primary urinary bladder adenocarcinoma from colorectal adenocarcinoma secondarily involving the bladder (13). In addition, 89% of medullary carcinomas of the colon and rectum were recognized by CDH17 (14).

Compared to CDX2 or CK20 alone, the combination of CDX2 and CDH17 is highly sensitive and somewhat specific for colorectal and stomach adenocarcinoma in routine immunohistochemistry, especially in cases with a CK7-/CDX2-/CK20- carcinoma (6,10,14). Data suggests that the combination of CDX2 and CDH17 along with CK7 may improve specificity compared to the panel consisting of CD20, CDX2, villin and CK7 (1-13). 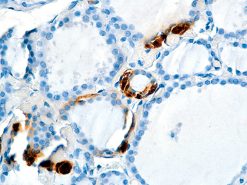